Missile Defense in Chicago Back In The Day 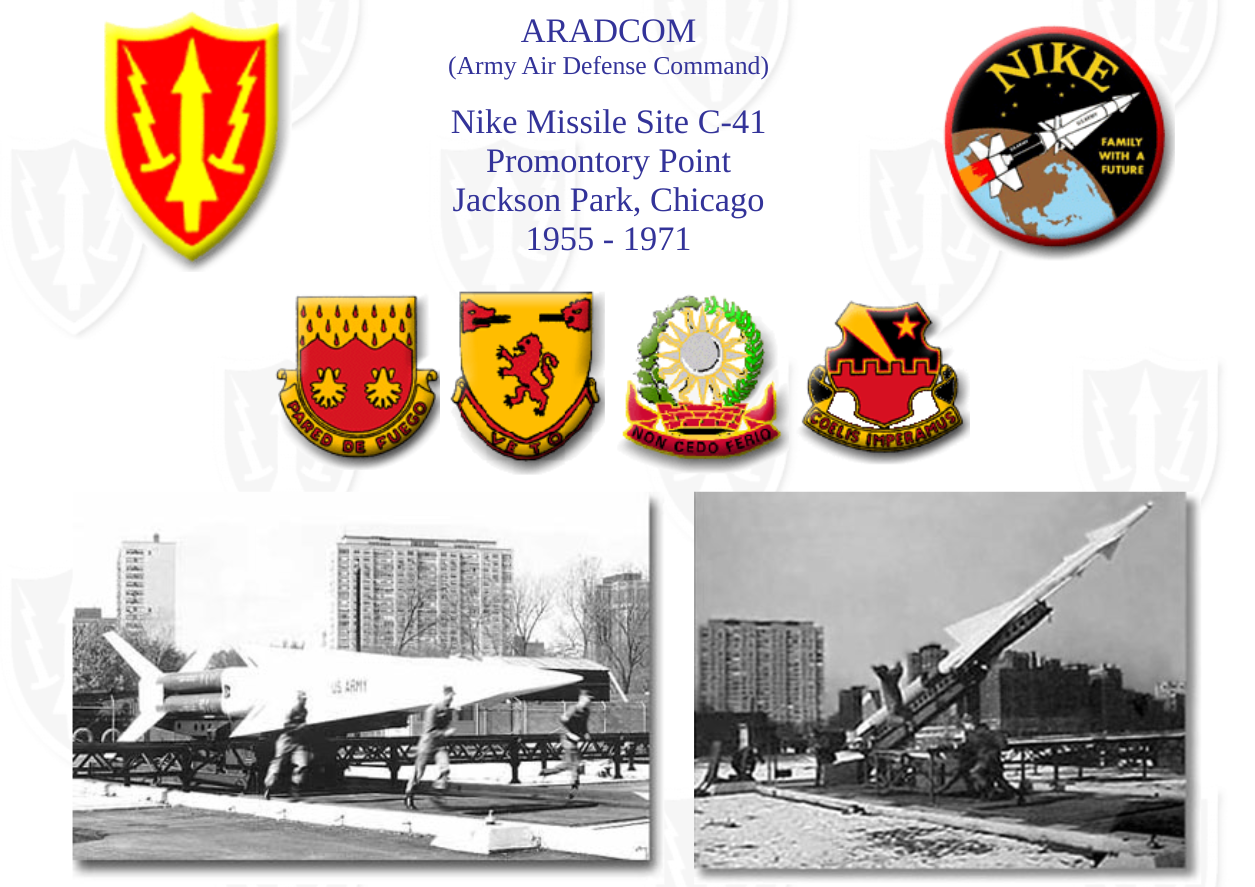 An interesting paper about missile defense of Chicago during the Cold War. Thinking the unthinkable.

We visited a Nike Site while in Cub Scouts. I have no idea which one.

I served in a Marine unit for one year that shot similar but smaller HAWK (Homing All The Way Killer) Missiles, defending from low flying attack aircraft. We were successful - Yuma, Arizona was never attacked while I was there.  The Hawks were used during the first few years of the Vietnam War and Israel used them effectively during their wars.

It is not so easy to hit a fast jet aircraft. A good thing the bad guys never launched.

Libertyville, Illinois Nike Site
MWCS-48 (Marine Wing Communications Squadron) used to go there for weekend drills.  An excellent little base that was a ruin when we trained there in the 70's and 80's.  There were a number of buildings which the Seabees tore down, and left quite a mess.  And there were underground bunkers where I troops would shelter from rain or from hiding out from the Officers and Staff NCO's.
Our Huey helicopters would fly up from our base at the Glenview, Illinois Navy Air Station and give our troops a helo ride. Always a popular thing to do.
We also conducted small unit training at night.  We sent out a small platoon led by Gunner Walt Kidden (Rest in Peace, flew in Marine torpedo bombers in both the Atlantic and Pacific Theaters).  His assignment was to ambush other units.  Then our Commander sent out another patrol with the mission to ambush Walt.
Walt took his troops to the underground bunker and sheltered from heavy rain.  They then went out in the rain and fog to accomplish their mission.
Walt lost his men. I came across Walt while I was leading another patrol.  Walt came out of the mist, saying "I lost my f___ing men!"
No big deal, I told Walt. Come with us.  "No" he yelled. I am going to find my men."  And off he went into the mist.
They closed the Libertyville site many years ago, and have not closed the Glenview Navy Air Station.  The Helo Squadron was disbanded and MWCS-48 moved first to Fort Sheridan and the Great Lakes Navy Base.  Leaving us with fond memories.

Real estate values are rising very rapidly in our metro area. Our region is growing rapidly. This is reflective of our strong economy, and also the number of affluent retirees moving into our region. They have already earned their retirement income, and they bring in a demand for health services, paid for by insurance and Medicare.

Prices are rising in the two-county area because supply remains limited. The Sarasota County median sales price for single-family homes reached a new record with a median price of $407,000 in May 2021, a 36.6 percent increase from last year. As for Manatee County, the median price for single-family homes was $400,000 in May, a year-over-year increase of 23.1 percent.
https://www.ourtownsarasota.com/local-housing-market-delayed-by-stay-at-home/

Record-low inventory has resulted in record-high prices in the Sarasota and Manatee housing market. According to data from Florida Realtors and compiled by the Realtor Association of Sarasota and Manatee (RASM), May 2021 shows an increase in sales from the same time last year, with single-family homes closing within a median of just six days. Realtors in Sarasota and Manatee counties reported a total of 2,584 closed sales in May, an 84.7 percent increase from the same month last year, with 100 percent of properties closing at or above the original list price. Condo cash sales increased by 250 percent in Manatee County and by 152.8 percent in Sarasota. For single-family homes, cash sales increased by 168.9 percent in Manatee and by 154 percent in Sarasota.

Other major public improvements include:

We continue our work on various projects:

I serve as the Vice President of Sarasota Sister Cities. Contact me if you are interested in locating or expanding your business in Sarasota.
Craig Hullinger
Sarasotasistercities@gmail.com
941 312 1032
No comments:

My former neighbor writes an interesting and eclectic Blog:  https://www.richardnisley.com/

The Three-Minute Mozart
Pop Culture Released - Jul 17, 2021
Beatles' producer George Martin called him "The Three-Minute Mozart". He was referring to Paul McCartney, of course, and to his gift for composing memorable melodies, such as "Yesterday" and "Michelle".Even before composing these two classic Beatles' ballads, McCartney revealed his ear for melody, when he sang two show tunes, "A Taste of Honey", on the Beatles' debut album (PLEASE, PLEASE ME, March 1963), and "Till There Was You", on their second album (WITH THE BEATLES, November 1963).It was on their third album (A HARD DAY'S NIGHT, July 1964) that McCartney wrote his first bonafide ballad, "And I Love Her."After that, you could count on at least one McCartney ballad on each new Beatles' album, beginning with "I'll Follow the Sun" on their fourth album (BEATLES FOR SALE, December 1964).Being a classically-trained musician, George Martin had an exceptional ear for music, and was deeply moved when, in early 1965, McCartney presented him with "Yesterday". Martin was so taken with the ballad that he composed an arresting arrangement for string quartet. But would the public buy it, mixing classical music instruments with a pop song? In fact, they loved it, making "Yesterday" the Beatles' biggest selling song of all time. The ballad appeared on the Beatles fifth album (HELP! August 1965).What follows is a list of McCartney's ballads, a word about the instrumental accompaniment, and the albums on which they appeared."Michelle" – (RUBBER SOUL, December 1965 ). This time Martin scored the arrangement quite simply, for guitar and piano."Eleanore Rigby" and "For No One" (REVOLVER, August 1966) , With "Eleanor Rigby" Martin scored the accompaniment for double string quartet. John Lennon considered "For No One" to be one of Paul's best songs ever; the French Horn heard on the bridge, and as counter-point in the final verse, was performed at Martin's direction, by Alan Civil, who considered it among his finest work in the recording studio."She's Leaving Home" – ("SGT. PEPPER'S LONELY HEARTS CLUB BAND", June 1967). This time, the arrangement for small string orchestra was composed not by George Martin, but by one of his lieutenants, Mike Leander."The Fool on the Hill" – (MAGICAL MYSTER TOUR, November 1967). The flute accompaniment was performed at McCartney's direction, by Ray Thomas, of the Moody Blues."Martha My Dear", "I Will", "Blackbird", and "Mother Nature's Son." – (THE BEATLES, aka "The White Album" November 1968). The only instrumentation on "I Will" and "Blackbird" is acoustic guitar, by Paul, while "Martha My Dear" features piano by Paul, and a string arrangement by George Martin; "Mother Nature's Son" features acoustic guitar by Paul, and a muted brass arrangement by George Martin.Also recorded during the White Album sessions, was McCartney's seminal "Hey Jude" featuring Paul on piano, and on the long coda a string arrangement by George Martin Released as a single in August 1968, the song stayed atop Billboard's Hot One-Hundred for nine weeks."Let It Be" and "The Long and Winding Road" – (LET IT BE, May, 1970). The title track is a gospel tune that songwriter Paul Simon considered to be the equal of his gospel masterpiece, "Bridge Over Troubled Water.""The Long and Winding Road", is a haunting ballad that guest producer Phil Spector enhanced with string orchestra and choir. McCartney always resented Spectator's enhancement as overcooked, and strongly believed the original version was superior. In 2003, McCartney met with Apple recording engineers to remove Spector's enhancements, and return the song to its original sound, which can be heard on LET IT BE . . . NAKED (Nov, 2003)."Oh! Darling", "Golden Slumbers" – (ABBEY ROAD, Sept. 1969). This time, McCartney's ballads were upstaged, by George Harrison' two ballads: "Something" and "Here Comes the Sun", and by Lennon's gem for three-part harmony, "Because."What's interesting is that most of McCartney's ballads are rather sad songs, in stark contrast to his happy-go-lucky nature.- END -
No comments: 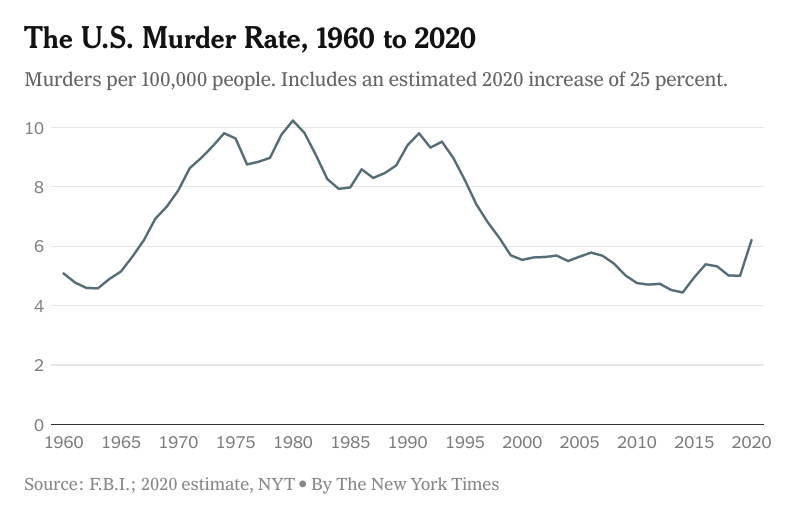 The murder rat has gone up recently in the US, but still has not anywhere near the rate from the late 1960's to the early 1880's.