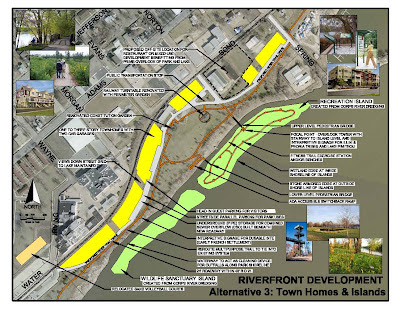 The Peoria Planning Commission and the Heart of Peoria Commission have approved the River Trail Drive Plan. Staff will now ask Council to authorize an effort to seek a quality company to develop the site. The plan is to create quality housing overlooking the Illinois River and Lake Pimeteau. The development will create a drive along the lake, providing all people to drive along the river, similar to Grand View Drive. A kind of "low rise". Grand View. Park islands will be developed to further enhance the riverfront.

Background: City Council authorized city staff to develop and refine plans for the Peoria Riverfront, and to take those plans to the public and City Commissions. Numerous presentations and charettes have been completed. The Heart of Peoria Commission and the Planning commission have approved the plans for the River's Edge Redevelopment Initiative, Green Edge Plan, River Trail Drive Plan, and the Cascade River Plan

2. The plans are consistent with and follow the goals, objectives, and recommendations of the Comprehensive Plan and Heart of Peoria Plan.

3. The plans were subject to extensive citizen participation, including meetings with neighborhoods groups, environmental groups, developers, individuals, the Heart of Peoria Commission, Park District staff, the Park District Board, the Corps of Engineers, IDNR, FEMA, public hearings before the Planning Commission, and a charrette with citizens and the Planning Commission. They were also subject to a charrette attended by a number of environmental professional agencies and governments.

4. The plans were presented to Planning Department staff, the city manager, Public Works and the One Stop Shop.

5. The Cascade Plan was developed in response to comments made at the Planning Commission public hearing and at other public meetings, where a number of people objected to blocking views of the River such as created by PMP, the Riverplex, and other developments. They also suggested that we put more effort into redeveloping the neighborhoods back from the river. The Cascade Plan calls for maintaining and improving views to the River as buildings are demolished, and also calls for revitalization of the neighborhoods.

6. The Heart of Peoria Commission considered the plans, and recommended their adoption (They did not see the Cascade Plan, which was developed later.)

7. A number of developers have been contacted about these possible developments, and some have expressed interest.

8. The plans are similar to and consistent with the plan of Grand View Drive, which incorporates views of the River, parks, a drive providing overlooks of the lake and park, and housing on the side away from the river, providing the tax resources to pay for the streets.

9. The plan is similar to the famous "Burnham Plan" in Chicago, which created the lake front park system with Lake Shore Drive and housing to help pay for the drive. The Burnham Plan calls for open views of the water, with parks adjacent to the water, bike trails, a road, and housing on the side away from the water - similar to our plans.

10. The plan would eventually interconnect Water Street and downtown with Grand View Drive. This will likely take many years to complete, and relies on the voluntary support of 8 land owners. All these land owners were contacted, and asked to consider donating the part of their land that lies between the River and the flood way line. They were also asked to donate an additional 50 feet of right of way for the eventual construction of River Trail Drive. Some of the eight owners are actively considering this donation.


If the City Council approves, we will look for a developer. The City prefers new urban, "green" development.

The City of Portland, Oregon, has a nice program on Sustainable Development

Email ThisBlogThis!Share to TwitterShare to FacebookShare to Pinterest
The Peoria Audubon Society has a nice web page. Take a look at:

I flew back from Florida to Midway Airport on Sunday June 22, 2008, and took the bus back to downtown Peoria, arriving at 11:00 pm. As a good new urbanist, I was walking the 1/2 mile from downtown to my home, wearing shorts and carrying a large bag and sweat shirt.
A young man rode up to me on his bike. I figured he was panhandling, and would have given him a few bucks, but I was wrong. He asked me where he might safely park his bike while he drank a beer. I pointed out a local watering hole, and noted that he could watch his bike out the front window while he drank his beverage.
"Great idea", he said. "Brilliant". "Thanks", he said, and rode off into the night. Then he returned.
Now he wants a few bucks, thought I. Wrong again.
"Are you OK?" he asked? "Yes", I replied.
"Do you need a few bucks", he asked? "No, I am ok", said I.
We parted on friendly terms.
__________________
Lesson learned:
1. Is this a great country, or what? Young man on a bike thinks I am down on my luck, and offers to help.
2. I should dress a little better.
3. And I should have said, "Of course I could use a few bucks- who couldn't? "
Next time
No comments:

The City Council has authorized that the required consulting studies be performed to support the creation of the Hospitality Improvement Zone (HIZ) Tax Increment Financing (TIF) District and the Business Development District (BDD). The project schedule is listed under the following:
HIZ Schedule

SBA has created an online tax savings resource center to help small businesses understand how they can benefit from the 2008 economic stimulus package signed into law earlier this year. The package includes the following tax incentives for businesses: a 50% bonus depreciation allowance on equipment purchased and placed in service in calendar 2008 and an almost 100% increase in the amount (from $128,000 to$250,000) that a business can expense for equipment purchased and placed in the business tax year beginning in 2008.

“The stimulus package is designed to spur the economy by putting money back into the pockets of American workers and encouraging small businesses to invest and expand,” said SBA Acting Administrator Jovita Carranza. “However, many small business owners are unaware of how it could boost their bottom line. In the roundtables I held with dozens of small business owners last week on tax policy, many were amazed to learn how much their companies could benefit from the temporary tax incentives in the package.”

2. Deprecation Calculator This useful tool provides an estimate of the first- year depreciation available under the provisions.

3. Online Seminar This brief tutorial summarizes the tax benefits and concludes with the depreciation calculator. T

hese resources should help small businesses take advantage of the stimulus package. However, because there are exceptions and additional requirements, small businesses are encouraged to contact their tax advisor to determine exactly how the provisions and implementing tax code of the 2008 economic stimulus package apply to their business. They may also refer to the IRS Website:

City Economic Development Staff are recommending that City Council approve the studies and process required to expand the Enterprise Zone to include the Metro Centre, Sheridan Village, and Evergreen Square shopping centers. The expansion process takes about six months, and would provide that the developers would not have to pay sales tax on building materials used for the expansion.

These three shopping centers all require some substantial new investment to stay competitive. Give Rachael Parker at 309 494 8640 a call if you need more information on the Enterprise Zone, or take a look at the web pages below: