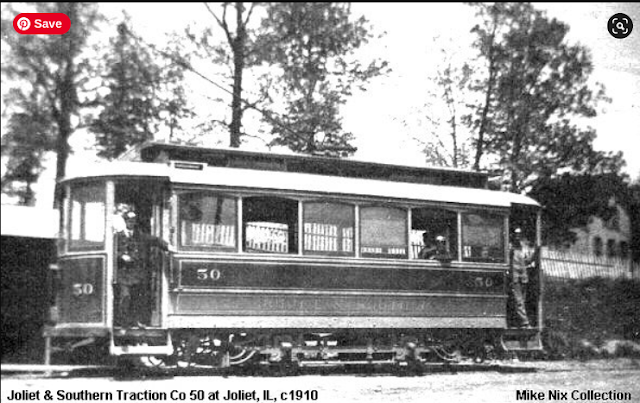 Electric interurbans are a kind of cross between streetcars and railroad.  A belt of lines was partially contructed around Chicago.

Joliet and Plainfield were connected in 1903, and extended in 1904 to Aurora and to Chicago Heights in 1909. The lines became unprofitable and were abandoned in the 1920's. 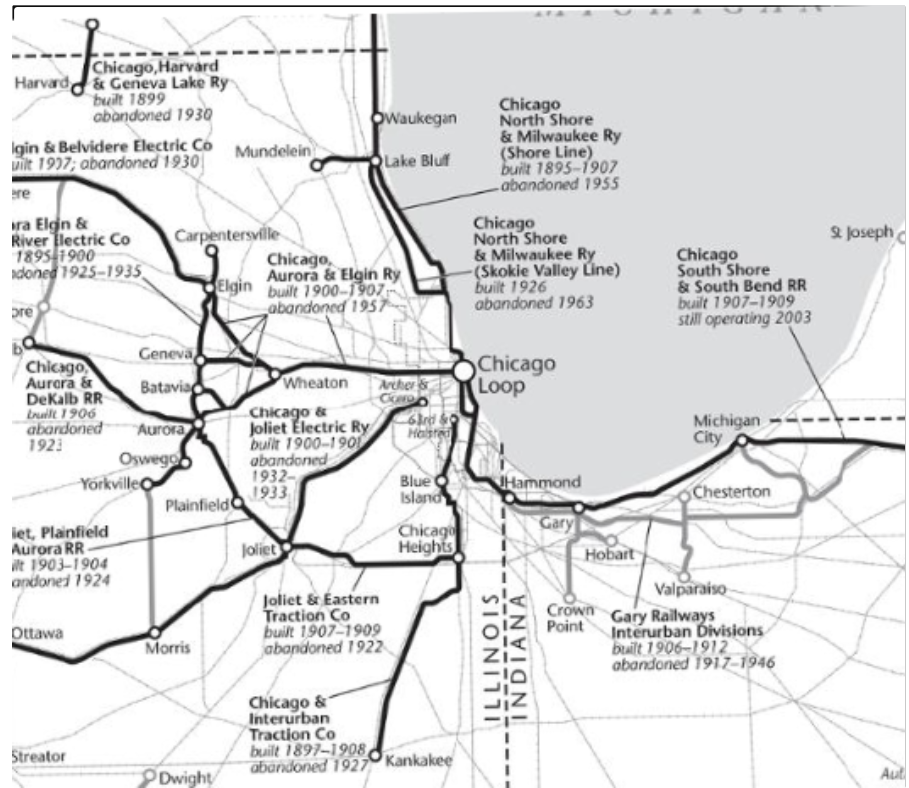 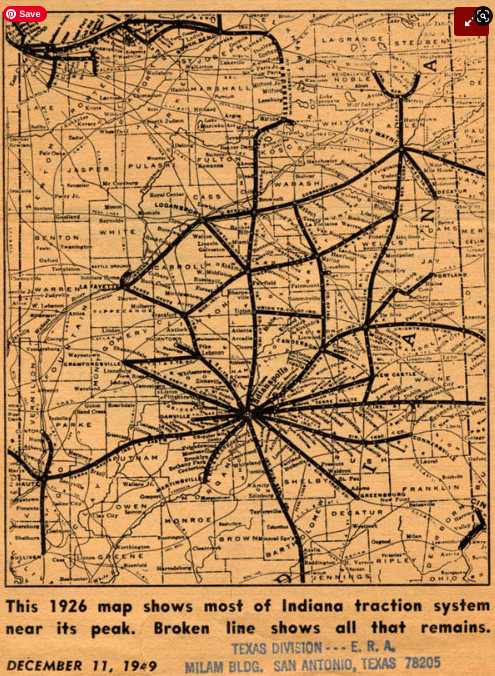 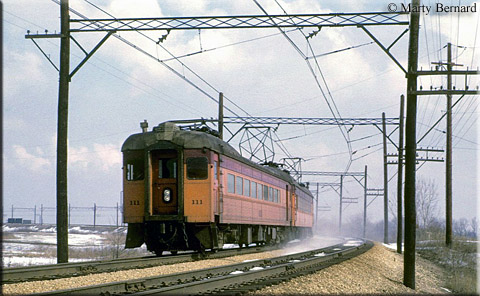 The interurban was an electric railway that was important in the eastern half of the United States from about 1890 to 1925. Interurbans provided passenger service between cities and towns.

Interurbans were a cross between a streetcar and a train. There were 15,500 miles of interurban rail in the US in 1915.


The South Shore Line that services Chicago to South Bend is one of the last operations still running in the US that began life as an interurban.  It still operates in Michigan City, Indiana down the middle of a street like a street car.  The equipment is now modern electric rail equipment. 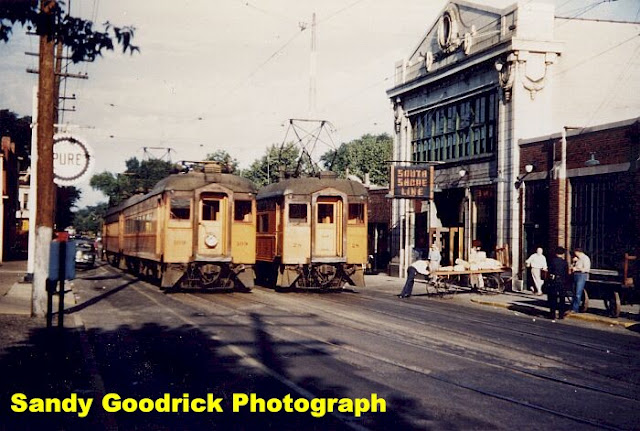 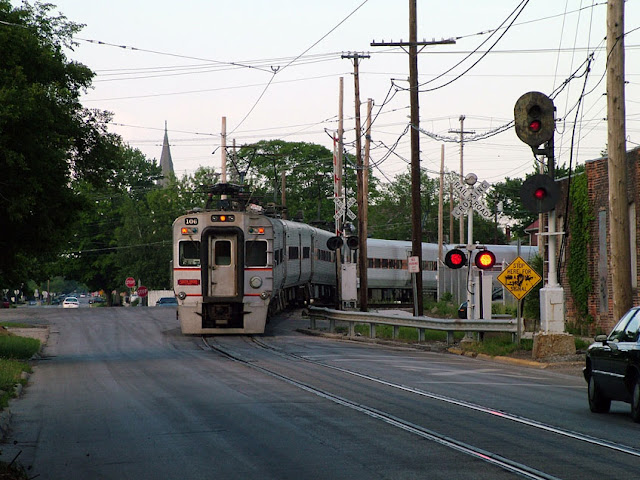 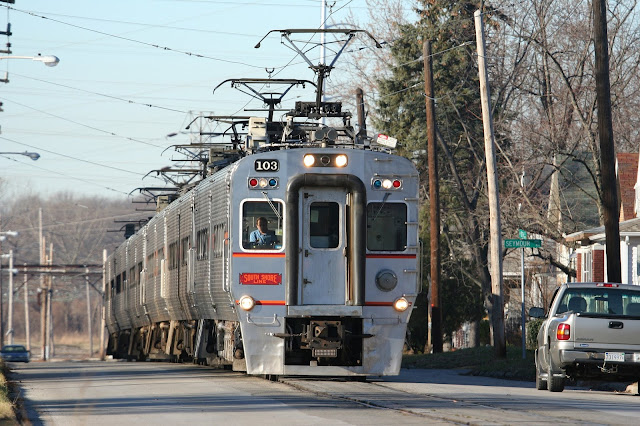 The South Shore Line has flag stops. Back in the good old days you would flag a train and it would stop and pick you up.
I did this at Calumet Harbor, a desolate spot with no sign of any kind of train station.  I simply waived my hand and the seven car train stopped from 70+ miles per hour. I ran to the train and hopped off and off we went. People were surprised to see the train stop to pick me up.

At night people would light a newspaper so the train would know that a passenger wanted them to stop.  Now flag stops have a

"push button located in or near the shelter to activate strobe light to signal train to stop. Please push button at least 5 minutes before scheduled departure time of train. Strobe light will turn off automatically after 10 minutes. Passengers should remain visible to engineer when standing at platform. There is no strobe at McCormick Place or 63rd St." 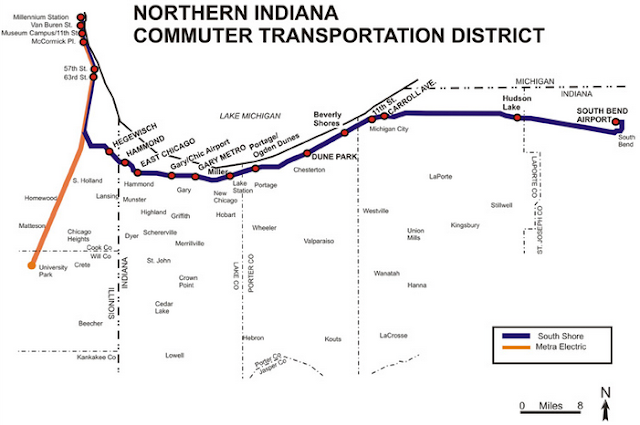 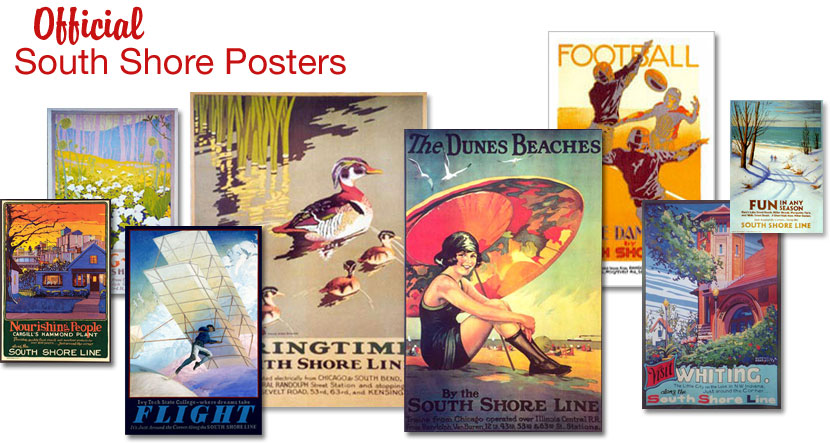 WHAT IS AN INTERURBAN?

Comparing electric interurban railways and "steam railroads". The three major interurbans entering Chicago were not typical interurban lines, enabling them to survive well beyond the 1930's, when most interurban lines were abandoned.

Operated until 1963 between Chicago and Milwaukee, Wisconsin.

Operated until 1957 west of Chicago.

The more traditional interurban lines were more local in nature, and were basically extensions of city streetcar lines into the country, and on to other cities. Such lines typically ran alongside country roads, which generally were not paved at the time. But the paving of such roads in the 1920's and 1930's made the local interurban lines obsolete, with buses able to do the job more economically.

The first local transit routes in Chicago's suburbs were electric railways, including streetcar and interurban lines. Nearly all of these routes were replaced with buses during the 1930's, evolving to today's Pace bus system.

Local interurban lines did once extend beyond the Chicago area into northern Illinois. But outside the 6 county Chicago metropolitan area, public transit agencies were never approved, and local and interurban public transportation disappeared entirely.

Some of America's most comprehensive interurban railway networks existed in the Midwest states beyond Chicago.

INTERURBAN LINES BEYOND THE MIDWEST

Beyond the Midwest, the development of interurban lines was generally quite fragmented, except in the densely populated northeastern United States, where many local electric railways existed and interconnected.

HOW DID THE INTERURBANS DIE?

The interurban industry is one of the most unsuccessful industries to ever exist in America. Included are misconceptions and myths, and what really happened to interurban transportation. 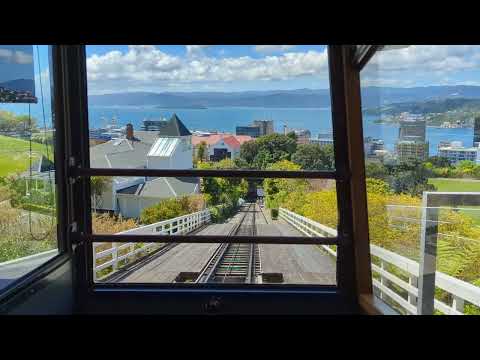 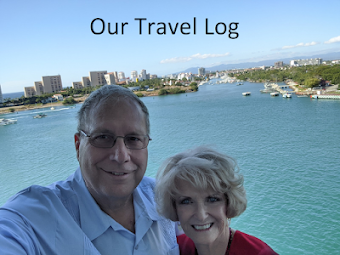